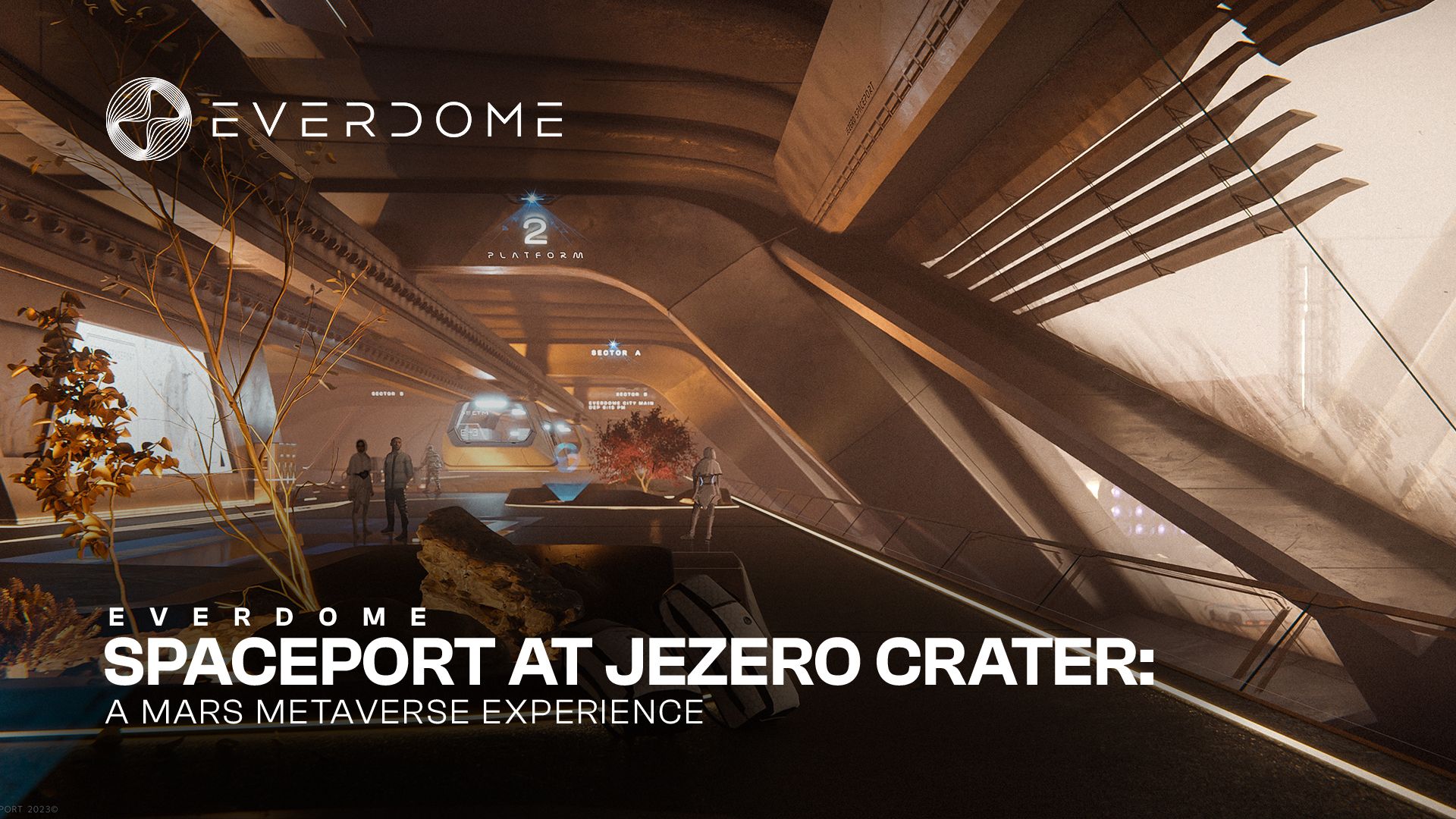 Unveiling First Looks at the Everdome Spaceport at Jezero Crater

Following on from our first metaverse rocket launch in November, Everdome is excited to announce the next stage of our hyper-realistic adventure.

We are delighted to share the first looks at the concept art of Everdome Jezero Spaceport, the interplanetary journey’s end for our metaverse pioneers and their first entry to a brand new digital civilization on Mars.

They will land at the spaceport after a voyage all the way from the Hatta spaceport on Earth on the interplanetary Everdome Cycler, via the reusable EVR Phoenix rockets which were demonstrated during our maiden metaverse rocket launches in October 2022. 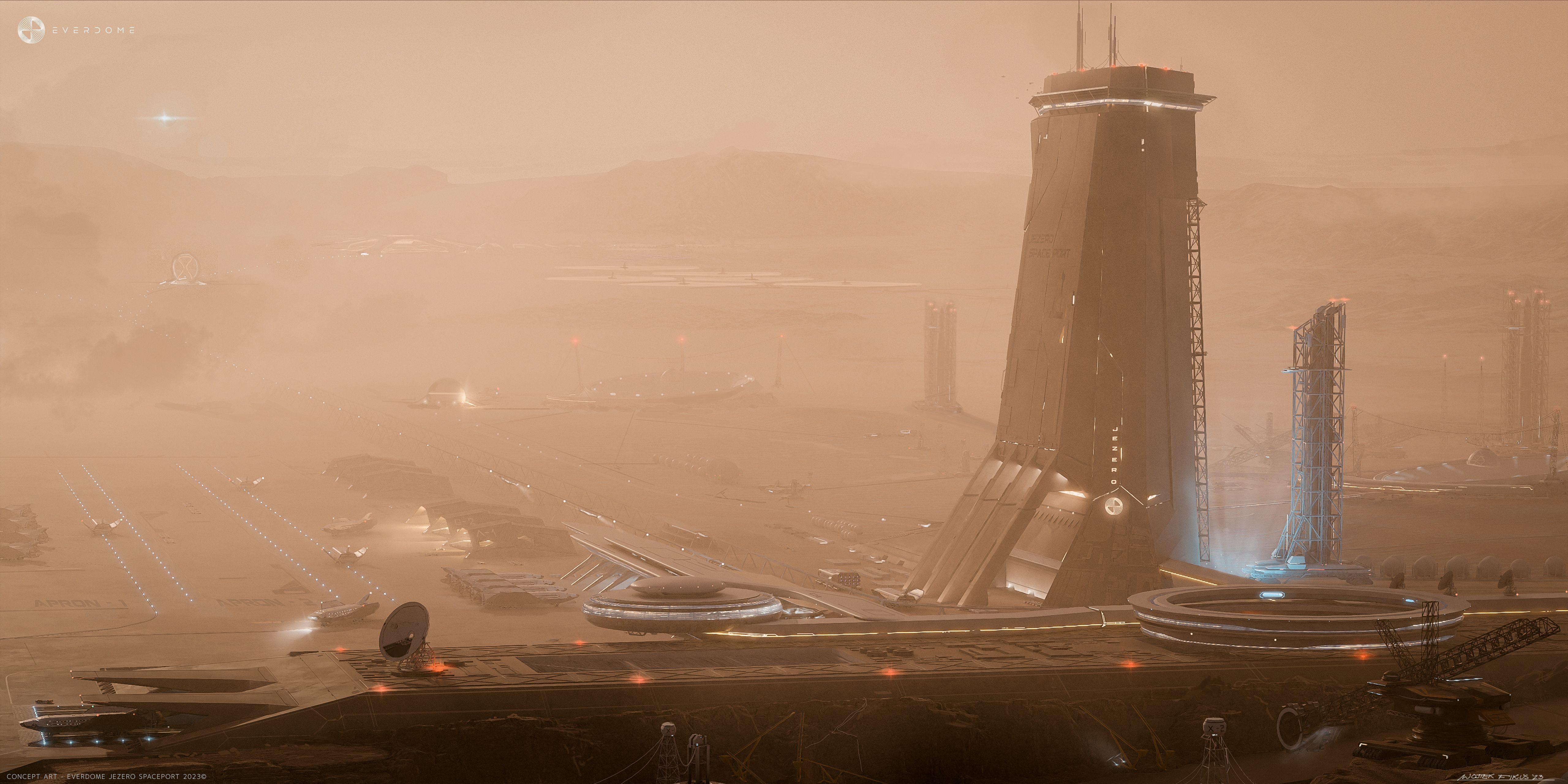 While Everdome Jezero Spaceport is a metaverse original location, the Jezero crater itself is an authentic part of the Martian landscape. What's more, it's been chosen by NASA and other space agencies for current space exploration missions.

Originally, the site was built on an ice mine that was later moved a few kilometers south to the crater’s lowest elevation point. This allows for easier access to the biggest water ice deposits and so the site was chosen specifically on the basis that water ice is one of the most important resources both for inhabitants (water, oxygen) and for travel in the form of liquid hydrogen/liquid oxygen rockets (fuel).

Representing the hub for all cargo and passengers transiting to and from Everdome City, the near-future city being created at the delta deposits of the Neretva Valley, Jezero Crater, Mars, the Jezero spaceport is the terminus destination for Everdome’s metaverse space experience travelers.

These include areas to manage the various spacecraft operating from the hub, including:

Jezero Tower Bay, an enormous, 600 meter high vertical hangar used for rocket assembly and refurbishment. Here, the partly pressurized environment allows workers to go about their business without spacesuits, however breathing masks are still needed due to the risks of flammability and corrosion from any use of extra oxygen.

The Hangar, which is an 1100 meter long hangar built on top of the former pit mine. This is the first port of call for rockets and shuttles arriving at the 8km long landing strip. Upon landing, rockets maneuver into the hangar where quick disembarkation of the crew and passengers is facilitated before their transfer to the arrival terminal.

This Hangar is large enough to accommodate the entire Everdome City population in case of an emergency evacuation due to an accident or natural disaster.

Mass Drivers, which are two massive electromagnetic catapults to handle most launches into lower Mars orbit, necessary due to the lower Martian gravity and atmospheric pressure. Shuttles are placed onto a special track, and propelled at great speed by electromagnetic power into Mars’ orbit.

Heavy-lift launch pads, 6 of them in total, used for rockets of varying lift capabilities used for cargo missions or deep space flights.

Launch Pads for Planet Hoppers, 16 of these, used to launch planet hoppers - small craft used for on-planet transportation, ferrying the many scientific expeditions, mining parties and tourist parties to locations across the planet, including Olympus Mons and various famous historical landing sites.

Arrival and Departure Terminal Viewing Ports, which are two toriod structures designed to show visitors and new arrivals the entire panorama of Jezero Crater in all its splendor. Here can also be found lounges, shops and restaurants. It also links directly to the Monorail terminal, where new arrivals are sped into the heart of Everdome City.

You can see the video with the concept art details here.

This enormous and detailed spaceport has been ideated by Everdome’s worldbuilding team in partnership with Leszek Orzechowski, PhD, our space architect and Head of Science, who helps us remain true to our commitment to scientifically based principles, while the hyper-realistic art concepts are created by our concept artist and art director Wojtek Fikus.

Coming hot on the heels of November’s maiden rocket launch, this concept art release demonstrates the creation of an intrinsic part of our forthcoming Mars landing experience scheduled for release in 2023.

The Jezero Spaceport will be part of an immersive VR experience including the Everdome Cycler in Mars orbit, the Mars landing experience, the Jezero monorail and arrival at Everdome City headquarters.

Stay tuned for more information on our development soon, as we gather pace for first boots on Martian soil.