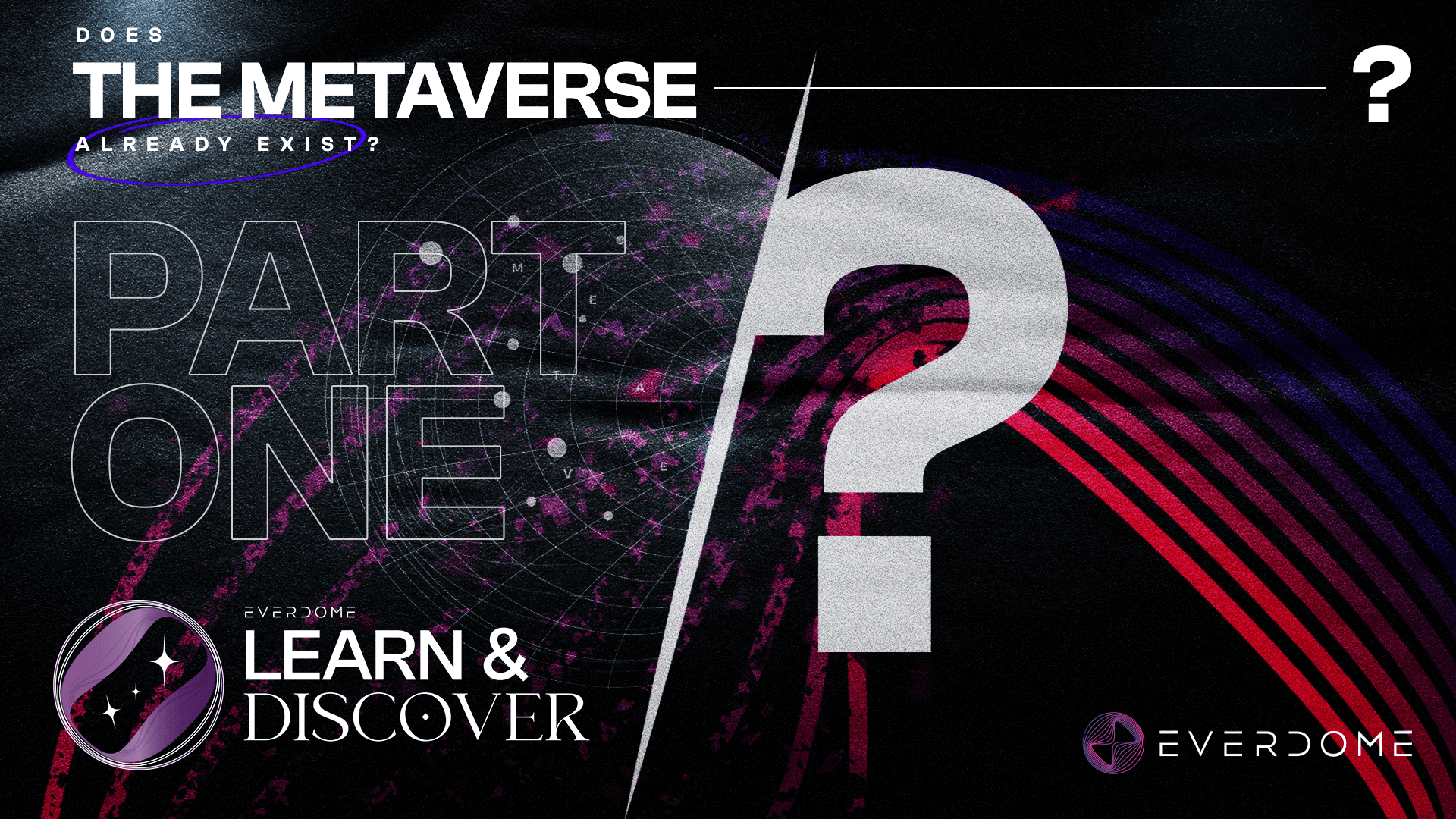 Does the Metaverse Already Exist? - Part One

Following on from our previous article, we continue our series of Everdome Uncovered to explore the question: Does the Metaverse already exist?

Everdome believes that the answer is currently - not yet. But it is on the way.

There have already been several highly popular platforms or games offering some of the overarching features of immersion, personal agency and real-time interactivity that we previously defined as vital components of any metaverse experience.

We feel that these earlier platforms can be most accurately described as ‘’proto-metaverses’’.

The most famous of these early metaverses or proto-metaverses was Second Life, launched in 2003 but with development dating back to the late 1990s. This proto-metaverse allowed real-time interactivity and featured a pre-crypto digital currency called the Linden Dollar.

Many struggle to understand if the metaverse is a game, an experience or something in between.  Residents of Second Life did not have a designated goal and there were no traditional gameplay mechanics or rules in place. Instead their experience focused on social interaction, user-created content and user freedom. This is part of many contemporary views on how the metaverse may eventually look.

The next well known proto-metaverse came in the shape of Roblox. Roblox provides some of the components we previously identified in terms of user agency, interactivity and also an in-experience currency called Robux.

It offers its users an interactive experience where they can build their own creations and be rewarded with a native currency. Roblox has also partnered with some major brands such as Nike, allowing their users to create and sell creations for the in-game currency.

With Roblox, anyone can create games and experiences and monetize them directly on the platform. The key word here is experiences. They already look to move beyond entertainment and into ideas of interaction and community.

The most recent incredibly popular example is Fortnite. They took ideas of immersive game play and real time interactivity to the next level, attracting millions of users worldwide, as well as major brand co-operations from the likes of Balenciaga, Nike and Time Magazine.

Within Fortnite, users can form teams or battle each other, whilst using an in-game currency - V-Bucks, to purchase various digital assets.

The final proto-metaverse that we want to discuss here is Minecraft. While some argue that Minecraft is more decentralized than some of the others, as large parts of it are open source, accessible and playable by anyone, the game itself is still owned and controlled by Microsoft.

Furthermore, Minecraft creators have also started to harness the power of immersive experience for activities beyond gaming, such as education, specifically using the Minecraft word to teach math, history and more.

But are they metaverses?

They are centralized. Roblox, Fortnite and Second Life are all controlled by a central authority, with the internal servers and the policies of the relevant company set up to regulate the virtual world.

In such centralized environments, the virtual community lives within the confines of a centrally controlled space and the users are limited within those parameters. The community can interact together and share experiences, but they don’t have the freedom to control or own pieces of the digital environment.

Secondly, they are neither interconnected or interoperable. You cannot currently take your Robux and exchange them for V-Bucks, nor can you move your character from Fortnite to Second Life.

This is the main difference between these early proto-metaverses, and Everdome’s vision of the metaverse as a broader universe in which Everdome will live. All these proto-metaverses offer interactivity, a basically immersive nature as well as real time activity, but remain largely centralized while all of them lack the interoperability which we believe will take the metaverse from an interesting concept to a transformative technology.

We view the metaverse as much bigger world than just one platform, where each metaverse experience, Everdome included, will be a destination within this larger world.

What can we learn from them about the metaverse's potental?

So where does this leave us in our understanding of the potential of a future true metaverse?

One strong takeaway is the number of users and amount of revenue generated by these proto-metaverses. Minecraft had 140 million active monthly users in 2021, while it was estimated that Fortnite had 400 million users plus.

Meanwhile, it was estimated that Roblox made $1.92 billion in revenue in 2021, while even the oldest proto-metaverse we discussed, Second Life, still created $8.5 million despite waning interest and user numbers.

They also demonstrate the possibilities for a crossover between real and digital worlds, with traditionally non-digital companies such as Nike, Ferrari and Balenciaga getting involved in a digital and interactive presence.

Finally, Roblox and Minecraft demonstrate that millions are interested in creating inside platforms. If the metaverse is to succeed, creators will have to become an active and profitable vertical of the metaverse economy.

There are 12 million creators on Roblox alone, having built over 32 million experiences. Now imagine how this can grow with the advent of higher quality graphics such as Unreal Engine, or visual AI such as Dall-E.

From this we can see that the proto-metaverse is already up and running in multiple mass market Web2 platforms which offer virtual identities, immersive worlds, and real time interactivity.

Everdome’s goal is to take immersion in digital experiences to new levels with our hyper-realistic approach, while doing our part in evolving the proto-metaverse into a more expansive virtual world, a true metaverse of multiple experiences, where users can have a digital persona that moves and exists between worlds.

However, the basic idea of the metaverse can even be much older. In our next article, we will take a look at some ideas of ancient metaverse ideas, to explore how the metaverse fits into a much longer tradition of human storytelling and experience.