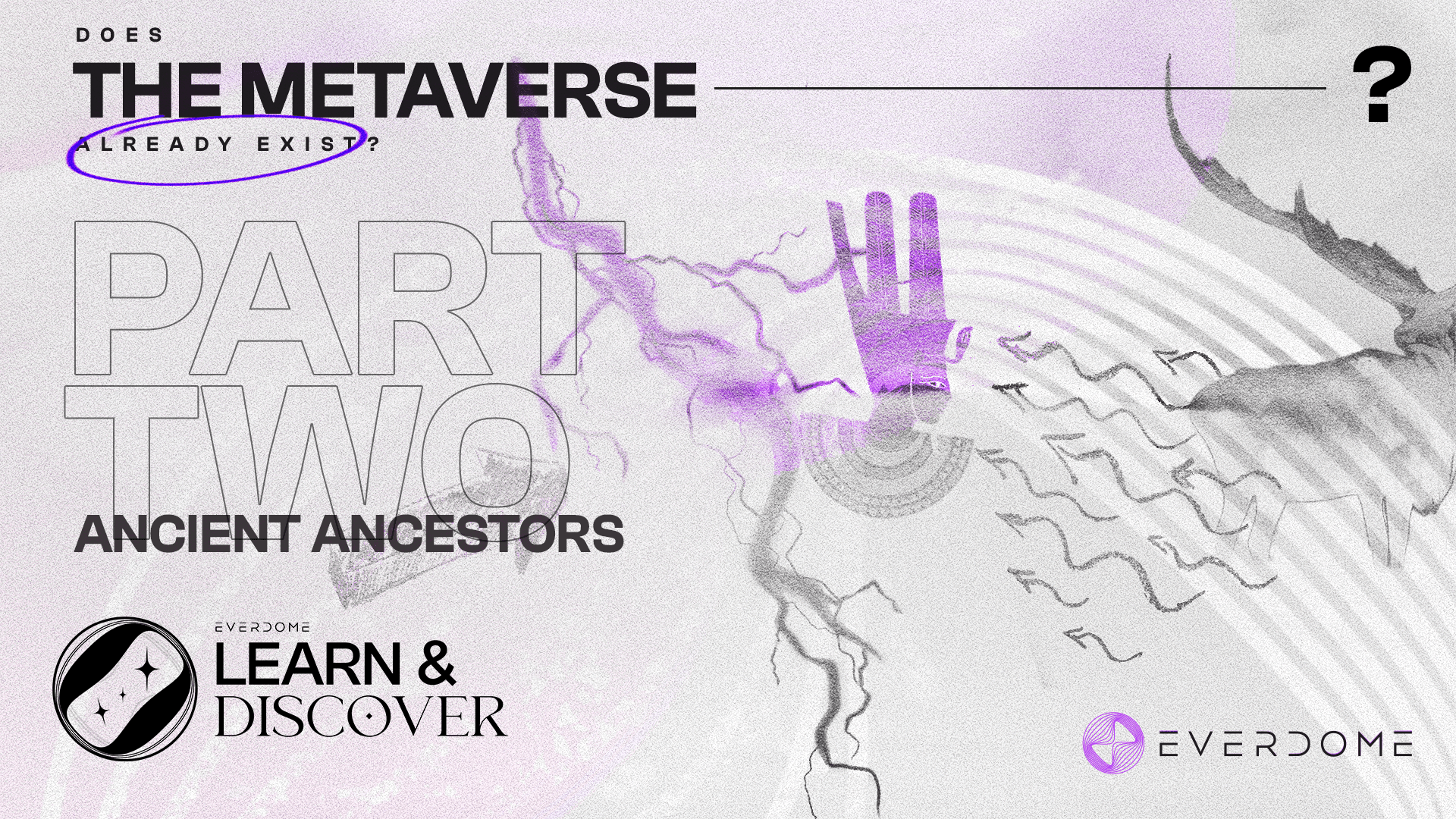 Continuing from our last article in our Everdome Uncovered series, we take a step further back in time while exploring the question: Does the Metaverse already exist?

We previously looked at ‘’proto-metaverse’’ examples which have a few of the basic attributes of our definition of a metaverse.

However, let us also explore some more ancestors of the metaverse from slightly different angles, looking at storytelling, the creation of more ancient imagined worlds and the impact these imagined worlds have had on real life experience and actions.

In some respects, the metaverse is a place for storytelling and experience. Users and inhabitants of the metaverse should be able to create and live their own stories inside an imagined universe brought to life by collaboration between imagination and technology on an unprecedented scale.

Virtual worlds that have been breathed into life through the power of human collective imagination. This is the essence of digital worldbuilding.

However, humans have always been a species of worldbuilders, so can it be seen that the metaverse is just the next chapter in a very long history of human worldbuilding?

In a sense, humans have been designing other ‘realities’ since the dawn of time, building imagined worlds across multiple civilizations all over the world, throughout the centuries, using only language, shared social belief and imagination.

Humans have constantly used myth and legend to guide behavior and give real-world existence deeper meaning. It is perhaps also no coincidence that many myths are very similar, even when created by societies that had no interaction with each other.

For example, there is a mythical beast called ‘’Curupira’’, who lives in the forest of Brazil. This was said to resemble a man, but with backward turned feet which he uses to create footprints that lead back to their starting point, creating confusion for travelers.

Meanwhile, in Slavic folklore, a forest dwelling humanoid called a ‘’Leshy’’ is spoken of, who has the ability to lead travelers astray and abduct children.

Humans constructed stories and shared imagined worlds in order to better explain real-world events, (for example losing your bearings in a forest) and to bring increased richness to their lives.

Throughout human history there are numerous, richly detailed imagined worlds that have had even greater real and direct effects on real-life existence.

The society of ancient Egypt created an imagined metaverse of the underworld, known as the Duat. Here, spirits of the dead were assessed by a god, Osiris, who determined the virtue of their souls to categorize who deserved a peaceful afterlife, or other, less pleasant possibilities.

This imagined world of the Duat meant that various real-life actions came into place, including the final funeral traditions of the ancient Egyptians and even the construction of the pyramids.

Furthermore, the Vikings imagined afterlife worlds called Valhalla and Folkvangr. Valhalla was described as a majestic hall with an everlasting banquet, while Folkvangr was depicted as a peaceful and sunlit meadow.

Such pastoral or pleasant imagined worlds had a defining effect on real-life behavior, as the Vikings' attitude toward death was key to successes in war, raiding and exploration.

These are just a few examples of human imagined worlds that can be seen as ancestors to digitally created imaginary experiences. We have been creating such imaginary worlds for a very long time, worlds to inspire us to further accomplishments and better lives (or sometimes also terrible deeds).

If we state that a key reason for creating metaverse experiences is to generate value, fulfillment and improve our lives in the real world through either learning, personal growth or relaxation, then it can be argued that the metaverse is part of a much longer tradition of human imagination.

Whereas ancient humans created their imagined worlds with language, art and imagination, we now have much more advanced tools, technology and a much broader and integrated world society.

This means Everdome builds on a rich and ancient heritage by crafting our imagined worlds with unprecedented realistic detail and immersive VR assisted experiences, creating them for a truly global community.

We can see the metaverse can be viewed partially as a new medium for a very old tradition of imaginative worldbuilding. Our goal, and that of other metaverse worldbuilders is the same as within this older tradition. To create new experiences that add value to human life, to foster greater experience, closer community ties and positive real-world life effects.

Stay tuned for our next article which concludes the first part of Everdome Uncovered, bringing us up to date with an exploration of the newest metaverse experiences being created, and a quick look at the future of the metaverse as we see it.